How long does it take a lemon to ripen? Any guesses?

We bought our citrus trees a year and a half ago from One Green World. Last year, after the petals of each purplish-white flower fell off, there was a tiny, dark-green fruit. But within a few weeks, these turned yellowish brown and fell off. None of the fruit set. The trees weren’t big enough to nourish them yet.

This year, both our orange and our lemon trees are bigger, still only about two and a half feet tall but with several branches. This past spring, several of those tiny green fruits hung on and grew. And grew some more. About midsummer, they weren’t expanding anymore, but they were still green. It was September before the first yellowish shades began creeping over the largest of them. But the yellow advanced slowly. By October 1, about half of the lemon was yellow. Gardeners are used to being patient, but this gave the word a whole new meaning.

The first frost arrived. And, since citrus trees are sensitive to frost, I started bringing them into the house at night, heavy with their still-unripe fruit. That went on for about a week, and then…glory be…one morning as I was moving them back out into the warming sun, I discovered not one entirely yellow lemon but two! Today, five months from the appearance of the year’s first miniature green lemon, we had our first harvest.

I cut the fruits from the tree with scissors, and the citrus aroma released by the cut stem immediately rewarded me. Who would have expected such an exotic smell here in Virginia? I thought. Until eighteen months ago, when I learned from a blog that growing citrus in pots was feasible, I certainly wouldn’t have! 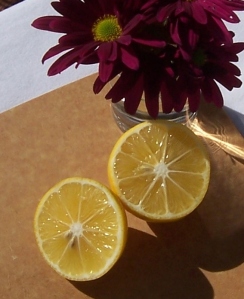 Today’s unseasonably warm weather meant that I didn’t have to think long about how best to savor these firstfruits. Lemonade was the obvious way to make them palatable to every member of the family. So we squeezed up our first two lemons, which were each about 4 oz., making 6 tablespoons of juice in all. And we made a delicious, ice-cold pitcher of lemonade.

I did know that winter was orange season. As a child, I would always get an orange in my Christmas stocking. They came fresh from the Florida orange groves near my grandparents’ home. But I’d never thought about lemons’ ripening at the same time. When did people start drinking lemonade in summer? It sure seems to me that November is the logical start to the local lemonade season!

So, in case you like the idea of eating–and drinking–with the seasons, here’s our recipe for lemonade. Join us in toasting the first week of November!

Lemonade needs to be prepared at least a couple of hours ahead of time, because it starts with boiling water and sugar, and these need time to cool before you add the lemon juice. Also, if you don’t want to have to add too much ice, you’ll want to give the lemonade time to chill in the fridge.

First, juice your lemons to determine how much juice you have to work with. You’re going to need 1-1/2 Tbsp. lemon juice for every cup of lemonade you want to serve. Once you’ve measured your lemon juice, put it in the fridge for later.

Now fill a medium saucepan with 1 C. water for every 1-1/2 Tbsp. lemon juice you have. For each cup of water, stir in 3 Tbsp. sugar. Heat the sugar water to boiling. Let boil 2 minutes. Remove from heat and let cool.

When the mixture is cool enough to dip a finger in, you can add the lemon juice to it. Add a pinch or two of salt to taste. Then serve cold or over copious amounts of ice. Enjoy!